A child with fever requires proper care. The normal temperature of children tends to vary with his/her age, activity level and time of the day. Infants are predisposed to have upper temperature levels than older children. Almost everybody has temperature that peaks in between late in the afternoon and early evening and drops between midnight and the early hours in the morning.

On its own, fever is not an ailment but a symptom of sickness. Generally, it is usually a clear indication that the body is presently dealing with an infection. It is important to note that fever rouses certain bodily defenses such as the white blood cells that destroy the invading bacteria.

Fever is vital in helping a child fight his/her infection. Nevertheless, it can cause discomfort. It increases the need for fluids and makes the heart rate and breathing more rapid. 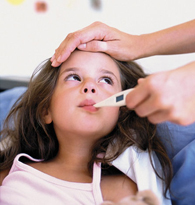 Generally, it is usually a clear indication that the body is presently dealing with an infection.

Fever is usually present in various respiratory conditions such as:

How to use a thermometer

If a child is suspected with elevated body temperature, you can take his/her temperature using a thermometer. Remember that feeling the skin is not accurate especially if the child is suffering from chills.

What are febrile convulsions?

Among children between the ages of 6 months up to 5 years, fever can instigate seizures which are also known as febrile seizures. The convulsions are likely to be hereditary and typically occur during the first few hours of a febrile illness.

The child might appear peculiar for a few moments, stiffen, twitch and roll his/her eyes. The child becomes unresponsive for a short time and the skin appears darker than usual during the episode. The convulsion typically lasts less than a minute and ends in a few seconds.