A broken leg is a term used to describe a fracture on any of the three bones that form the leg. The fibula and tibia are bones in the lower leg that are prone to injury than the thigh bone. To learn to recognize and manage bone and muscle injuries, register for a first aid course with a credible provider near you.

There is abrupt pain right after a force or impact on the leg that entails hospital treatment. In most cases, the individual will suffer from constant pain that will worsen when trying to move the leg. There is tenderness around the site of the fracture that is accompanied by deformity.

In severe cases in which the bone pierces through the skin, it is called a compound fracture. Bruising and swelling are also likely to occur when an individual ends up with a broken leg. 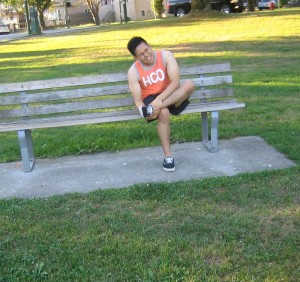 In most cases, the individual will suffer from constant pain that will worsen when trying to move the leg.

What is a femur fracture?

A broken leg due to a femur fracture is considered uncommon and typically due to a vehicular accident. If the individual sustained a stress fracture of the femur, it is more likely to damage this bone. It is important to note that a femur fracture is one of the bones in the body that heals at a very slow rate due to the poor blood supply.

What is a tibia fracture?

This occurs when there is a break in the lower shin bone. Take note that this bone is sturdy and is responsible for weight bearing. This type of fracture is usually caused by direct impact but stress fractures on the shin are also common.

What is a fibula fracture?

The fibula is the smaller bone in the lower leg with the function of acting as the attachment point for the muscles of the lower leg as opposed to weight bearing such as the tibia. Fractures to this bone can occur due to direct trauma or a stress fracture.

Once a broken leg is suspected, it is vital to seek medical attention right away. An X-ray will be carried out to confirm the injury and determine the extent of the damage. In most cases, the doctor will also assess if there is no linked injury to the blood vessels or nerves in the area.

It is important to note that a plaster cast is usually applied to the affected leg in order to immobilize the bones while they are healing at the same time. The cast is usually worn for a span of 6-8 weeks. In circumstances in which the bone is broken into more than one piece or if the fracture is displaced or open, surgery is the only option to repair the injury.

Surgery involves bringing the bones back together and holding them in place using wires or pins. The broken leg is placed in a cast. Once the cast is removed, the individual will follow a rehabilitation program in order to restore full strength and movement in the affected leg.