The posterior deep compartment is bordered by a sheath that contains the muscles of the lower leg. When it comes to compartment syndrome, it typically develops once a muscle is too big for the sheath that surrounds it.

Posterior compartment syndrome can be categorized as acute or chronic. An acute injury can be caused by an impact or contusion which causes pain and limited movement of the ankle. As for chronic cases, it can cause deep throbbing pain in the inferior leg that occurs while running and subsides with rest only to return when the individual starts training again.

There is also pain when pulling the foot and toes downwards against resistance. Oftentimes, foot drop along with significant weakness is present when the individual lifts the foot when walking. To learn to recognize and manage muscle injuries including posterior compartment syndrome, sign up for a first aid course today. 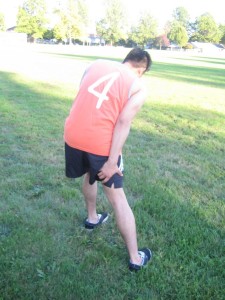 An acute injury can be caused by an impact or contusion which causes pain and limited movement of the ankle.

As for a chronic compartment syndrome, it typically develops over a longer period of time through overuse. The muscle grows too large for the compartment or sheath that surrounds it, resulting to an increase in the pressure inside the compartment, thus it will trigger pain.

There are also biomechanical factors such as over pronation in which the foot rolls inwards or flattens excessively. This can abnormally increase the strain on certain muscles, thus increasing the risk for compartment syndrome.

The individual should find enough time to rest but try to exercise the upper body as long as it is not painful. You can apply an ice pack for 20 minutes at a time. Utilize a moist tea towel or commercial ice packs to prevent skin burns.

An acute compartment syndrome is usually managed with anti-inflammatory medications such as ibuprofen to help minimize the pain and swelling. A doctor should be consulted before taking any medication. Remember that ibuprofen should not be given to those who have asthma.

As for chronic compartment syndrome, it is managed with cross friction massage methods that aim to stretch the sheath which results to additional space for the muscle. In most cases, full gait analysis is done to analyze the running style and any biomechanical issues of the foot that must be modified with the use of orthotic inserts. The inserts are placed into the shoes and correct the motion of the foot which reduces the load on certain muscles in the lower leg.